Her Majesty Queen Elizabeth II has been one of the greatest and most influential supporters in the history of horseracing.

Her Majesty’s favorite sport will come to a standstill in the UK on the day she is laid to rest. The British Horseracing Authority has just confirmed that on Monday, September 19, racing will be halted in observance of the late Queen’s funeral. 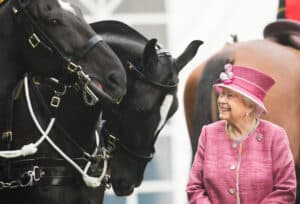 Her Majesty’s favorite sport will come to a standstill in the UK on the day she is laid to rest.

In a statement, the BHA said “British racing will not go ahead on Monday 19 September – the date of the funeral of Her Late Majesty The Queen. This will give everyone involved in British racing the opportunity to mourn Her Late Majesty’s passing and offer thanks for her contribution to our sport and the nation.”

Before the first race of the day commences, half-mast flown flags and silences will be observed with all racecourse jockeys wearing black armbands.

Even though the racing league is ongoing, as a gesture of respect, the meetings scheduled for Hamilton, Leicester, Warwick, and Wolverhampton will all be canceled.

“All of British Racing is in mourning following the passing of Her Majesty the Queen, Her Majesty has been one of the greatest and most influential supporters in the history of horseracing. Her passion for racing and the racehorse shone brightly throughout her life”

Chairman of the British Horse Racing Authority, Joe Saumarez Smith, insisted that racing owes an incalculable debt of gratitude, not only for Her Majesty’s dedication and commitment to the sport, but for her public advocacy of it.

On Saturday, a horse bred by Queen Elizabeth won a race in the American city of Baltimore. The horse’s victory came two days after the British monarch died following a reign spanning seven decades. West Newton, a six-year-old horse, came back from sixth place to win by half a length, his fourth victory in 19 races.